​Competing for Quality of Life: A Day of Training at 12th Round Fit Boxing 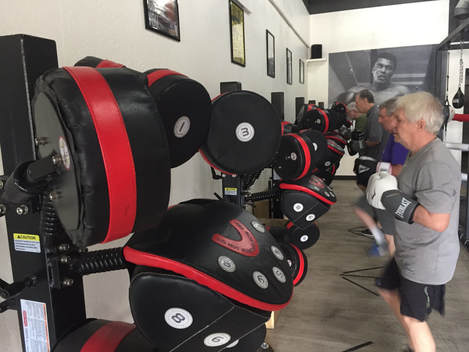 Robert Lane (gray shirt) trains in front of a numbered boxing dummy at 12th Round Fit Boxing gym in Scottsdale. (Photo Credit: Ben Leibowitz)
​It’s late morning in Scottsdale, and people are filing into a local boxing gym to train — but these aren’t your average Joes boxing for vanity reasons. They’re punching back against a degenerative neurological disorder.

Robert Lane, a 71-year-old who was diagnosed with Parkinson’s disease in 2013, arrives at 12th Round Fit Boxing gym in Scottsdale at approximately 9 a.m. each Wednesday.

His routine is simple. After entering the front door — close to a wall on the left side lined with an imposing platoon of black-and-red numbered boxing dummies — Lane hangs a right to set down his belongings on a plain white bench before getting his hand wraps and gloves on.

Lane looks over his shoulder to see boxing trainer Marty Barrett, the owner of 12th Round Fit Boxing, smiling at him after throwing the verbal jab.

“I guess that’s me,” Lane responds. “I say all these nice things about you…”

The two share a laugh. Barrett playfully rubs Lane’s shoulders as Lane pulls his white boxing gloves on to start his day of training. Barrett, a former boxer who trained with Mike Tyson and Floyd Mayweather Jr., sports a hulking frame that serves as a stark contrast to Lane’s, who stands just five feet tall.

He’s been training at Barrett’s gym since it was opened more than one year ago.

Robert Lane (left) spars while his trainer Marty Barrett (far right) looks on. (Photo Credit: Ben Leibowitz)
​“It stops me being sedentary,” Lane said of his boxing training. “I look forward to it immensely, but it’s a much more punishing workout than I’ve been used to — but it’s rewarding.”

Lane makes his way to the boxing dummies, where he’s directed to hit the numbered pads in a variety of sequences.

In addition to the physical toll this takes, it also tests Lane’s cognitive abilities. Lane said that his doctor, who originally recommended that he look into boxing as a type of therapy for Parkinson’s, says that this kind of exercise helps with coordination and memory in addition to improving balance.

Ask Lane about his favorite part of training, and he doesn’t hesitate.

“Well, sparring obviously,” he said. “We’re boxing, but we’re not getting any blows. We can throw a blow if we get in there.”

“But my problem, being only five-foot, I’m dealing with giants, so I have to reach harder.”

When Lane gets into the ring to spar with a young amateur boxer, he’s forced to hustle and really move his feet to keep up. Despite his physical limitations, he more than holds his own.

Lane closes in on his opponent, faking jabs with his left hand while moving forward. Barrett shouts from inside the ring:

“Shoot that right hand! Shoot it!”

Lane does as he’s instructed, and fires his right hand into the upper body of the youngster backing away.

“Good! That’s it! Just like that,” Barrett calls out in support.

These clients aren’t contenders in the mold of “Iron Mike” (for obvious reasons). Instead of competing for championship belts, they’re challenging themselves to work toward a better quality of life. And everybody is treated like a fighter in Barrett’s gym.

“I think it’s crucial that we have places like this that take Parkinson’s seriously, but not treat you as if you’re totally invalid,” Lane said.

For Barrett, it’s all about creating a fun and inclusive environment.

“It’s the camaraderie of being with each other,” he said. “They don’t care how much I know. They want to know how much I care.”