The University of Arizona is developing a snake bite treatment that could temporarily inhibit the effects of snake bite venom, giving those bitten extra time to find medical attention. 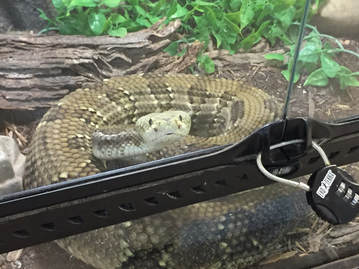 A snake looks out of its enclosure at the Phoenix Herpetological Society. (Photo Credit: Jake Goodrick)
He handles snakes every day — it’s his job — but in one moment of lapsed focus, he felt the sting he had so cautiously avoided for years. He turned his back for just a moment, and one of the world’s deadliest snakes struck his upper back.

Before pain consumed him, he knew he needed to get medical attention. It was his only chance of survival.

His staff tried to get him to the hospital by car. They ultimately pulled over to the side of the road, where the ambulance met them. EMTs hooked the snake’s victim to an IV, but there was little they could do. Treating the pain only goes so far, what he needed was anti-venom.

They made it to the hospital in time. He lived, according to a story recalled by Joseph Early, the division chief of emergency medical services for Scottsdale.

This victim was fortunate to reach help in time, but in the future, that timing could become less critical.

Researchers at the University of Arizona are developing a new treatment for venomous snake bites that could temporarily inhibit the effects of venom and help victims seek necessary medical treatment imperative for their survival.

Dr. Vance G. Nielsen, professor and vice chair for research in the Department of Anesthesiology at the University of Arizona College of Medicine, is developing the treatment. His research combines a mixture of carbon monoxide and iron that, when injected into a bite victim’s blood, has shown to prevent the effects of snake bites (like blood clotting) for up to an hour in animals, according to the UA College of Medicine.

“We don’t know, it could be even more. That’s just as long as I could test,” Nielsen said about the duration of the treatment’s effects. “It’s not that it wore off and went back to destroying things, that’s just how long it lasted.” 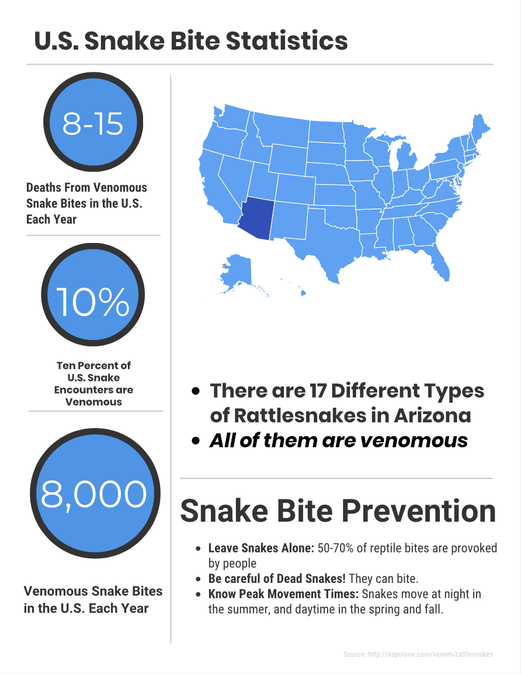 Following animal testing, Nielsen is now focused on testing the treatment on people. Ultimately, the goal is to develop an EpiPen-like device that could be administered at the time of the bite before a victim is able to get access to further medical treatment, according to the UA College of Medicine.

“Bottom line is, we’re going to have to treat bite victims as we go along and then see how they do by the time they get to the hospital. Did you protect them, or not protect them from the snake bite?” Nielsen said.

About 7,000-8,000 people in the United States are bitten by venomous snakes each year, according to the Center for Disease Control and Prevention. Nielsen’s research could help these victims increase their chances of survival and prevent the likelihood of permanent nerve damage.

Treating snake bites when they occur can sometimes lead to even more troubling situations. Sucking out the venom only works in the movies, and pre-packaged snake bite kits common among campers and hikers have also shown to be ineffective.

“Those (snake bite kits) are absolutely not effective,” said Joe Hymes, who works for the Phoenix Herpetological Society. “In most cases, people can end up hurting themselves more with them.”

Snake bite venom can both prevent blood from clotting (leading to uncontrolled bleeding) or bring about unusually fast clotting — potentially causing heart attacks, strokes and organ damage, according to the UA College of Medicine.

“Snake after snake ... doesn’t matter if it’s an enzyme that destroys or an enzyme that makes you clot faster, just about anything gets inhibited by carbon monoxide,” Nielsen said.

Nielsen’s carbon monoxide and iron therapy would temporarily prevent either reaction, and could change the way first responders and isolated hikers deal with snake bites. To Hymes, it could be revolutionary.

“If something like that was shown to actually be effective in slowing down the progression of the venom, especially rattlesnake venom … it would be huge,” he said.

Early, EMS’ division chief for Scottsdale, is receptive to the idea of the treatment. He said that ultimately, the practicality and price of the device will determine whether it will be stocked in ambulances and hospitals.
Early questions how much the device will cost, as well as how it will need to be stored and applied. Its expiration will factor in as to whether the treatment is used by first responders.

If the treatment gets commercialized and becomes available in an EpiPen-like form, it may transform the way snake bites are treated, but it may not significantly decrease the amount of fatalities from snake bites.

Approximately 8-15 people in the U.S. die from them each year, according to the University of Arizona Poison and Drug Information Center, which is only about one in every thousand bites. Oftentimes, those deaths are preventable, which brings into question how many lives Nielsen’s treatment would ultimately be able to save.

“Most of our snake bites here aren’t lethal to begin with as long as you seek medical treatment,” Hymes said. “The few deaths that do happen each year … it’s usually something where they’re really old or really young, or were in a remote place when they got bitten that causes them to die.”
doesn’t die, doesn’t mean that he or she is doing well. Bites can lead to prolonged treatment and blood transfusions that could potentially be avoided with his new treatment method.

Nielsen’s therapy, once finalized and available, will be a major innovation in the first response treatment of snake bite wounds. However, some suggest that preventative information, combined with increased caution and awareness of snakes, can be just as effective.

Once developed, Nielsen’s treatment has the potential to change the way victims, first responders and other medical personnel respond to snake bites. Any significant impact in terms of preventing death remains to be seen, but other medical drawbacks from bites still make this new treatment worth testing.

Using carbon monoxide — which is dangerous and even lethal to humans — to treat venom from snake bites may seem counterintuitive, but that’s not necessarily a new concept for the medical community.

The paradox of using an element of an ailment’s cause to cure the ailment itself can easily and understandably be met with skepticism by some. But in Arizona, it is helping patients to heal.

The irony is not lost on the doctors or their patients. Instead, they embrace it. Things don’t always have to make sense for them to work, and sometimes insight can be found in unconventional places. ​​​